Enterprise Network Design White Paper
For Metropolitan and Campus Networks –
MPLS L3VPNs Robert Shields
Sr. Network Engineer, CCIE # 12096 January 2012 Enterprise Network Challenges of Today and Beyond Enterprise network and security managers continue to see their responsibilities increase within their respective IT organizations as applications and services continue to migrate to IP as a fundamental means of communication. These applications and services include telephony, video, wireless and mobility clients, storage area networks, etc., with the list going on and on. The reality today is that most enterprise networks are now converged IP services networks with many different and diverse customer requirements. With the network requirements changing to resemble more of a service provider model, so too should the network architecture model. Enterprise networks traditionally supported server-based data applications, many of which were deemed critical applications, which could be secured with a tiered firewall architecture in the data center. Today, all types of new devices and appliances are being plug into the Enterprise IP network at numerous locations and they all have their own security requirements. Compound this by the new technical challenges of the day, including server virtualization, cloud computing, business continuity, and IPv6, and there is no lack of pressure on the network and security IT groups in providing a secure, scalable, and robust network environment that can continue to meet the challenges of today and the future. MPLS L3VPNs – Providing a Flexible Network Architecture Solution This white paper focuses on how MPLS L3VPN technology can provide many benefits to Enterprise networks by enabling a flexible network architecture that can accommodate a diverse set of customer requirements across a Metropolitan Area or Campus network. These benefits stem from the ability to logically segment or virtualize the network into multiple isolated routing domains called VPNs. The following is a list of the benefits that MPLS L3VPN can provide.

These benefits will be illustrated and substantiated further in the MPLS L3VPN architecture example that is described later in this document. A brief and high-level overview of the MPLS L3VPN technology is described next to ensure conceptual understanding of how traffic is isolated across the shared backbone infrastructure. Overview of MPLS L3VPN Technology There are a several main concepts that network and security managers should understand with L3VPNs.

All of these concepts are illustrated in the Figure 1. CE1 has two LANs that need to communicate using the L3VPN core using two different VPNs. VPN A is colored in blue, and VPN B is in red. Therefore, CE1 must connect to the MPLS network using either sub-interfaces or a trunked (IEEE 802.1Q – tagged) link so that the PE can define these logical connection into the appropriate VPN/VRF. Notice that PE1 is configured and has knowledge of both VRF tables, while PE2 & PE3 are only configured with the single VRF for which they have a CE connected to. When CE1 sends packets destined to both CE2 and CE3, it is PE1 that does an IP lookup for these packets using the appropriate VRF table, and then forwards the packets onto the correct LSP that will carry it straight out the egress port towards its destination. 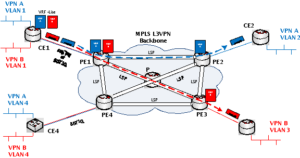 Figure 1. – MPLS L3VPN Concepts Other technologies that can also be deployed along with L3VPNs include the following:

The 6VPE implementation provides scalability with no IPv6 addressing restriction. This mode enables the enterprises to deploy the IPv6 MPLS VPN service over their existing IPv4 backbone by just upgrading the PE router to the dual-stack-capable software. This overview was only intended to cover the major concepts of MPLS L3VPNs, for more detailed technical and protocol information, please refer to RFC 4364 “BGP/MPLS IP Virtual Private Networks”.
Legacy Enterprise Network Architectures Many Enterprise network today look very similar to the topology depicted in Figure 2 below. Two or more physically distinct networks were built to meet different network and security criteria such as providing services on a Corporate network (a private internal network – only for internal staff use) as well as potentially a Public network (a network open for guests access – primarily for Internet). Also on the corporate side, there are likely some access control lists (ACLs) or Policy Based Routing (PBR) that has been implemented to facilitate requests from certain groups or applications owners that required addition security or access restrictions. These workarounds can lead to increased downtime due to configuration error and extended troubleshooting timeframes. Common network services such as DNS, DHCP, and SNMP will need to be deployed and managed for each separate physical network as well. These techniques are cumbersome to manage and are simply not sophisticated technologies that were intended to support an Enterprise network architecture design. Finally, there could also be several firewalls deployed at remote parts of the network to accommodate partner type connections or to securely protect a remote application user group or small server farm. MPLS L3VPN technology can allow the Enterprise network to alleviate all of these unpleasant practices as will be demonstrated in the following section.

Figure 2. – Legacy Network Architecture MPLS L3VPN Enabled Enterprise Network Architectures Figure 3 below shows a high-level drawing of a typical Metropolitan Area Network (MAN) or Campus network design using L3VPN technology. Depending on the overall topology of the network, the MPLS L3VPN enabled backbone can include core, distribution, and even some edge site routers. This depends on which sites need the flexible capabilities of MPLS. As Figure 3 illustrates, a typical Enterprise network will have a contiguous MPLS enabled backbone encompassing core routers at the data center and distribution routers, connecting the remote sites. This enables network virtualization within the heart of the network, resulting in the ability to provide flexible solutions for any number of unique network or security related requirements that are needed in the network today or in the future. 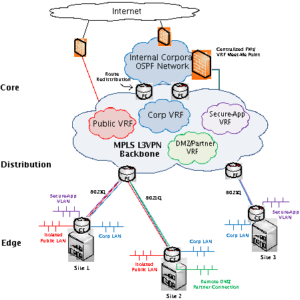 Figure 3. – Example MPLS L3VPN Architecture for MAN or Campus Network In this example, we can see several segmented VPNs that are serving different purposes within the Enterprise design. First, there is a “Corporate VRF” (blue) that is isolating the internal staff and data centers from other entities on the network. The corporate network existed prior to the L3VPN implementation, so there are likely several sites with multiple routers that were already running an internal routing protocol such as OSPF. Therefore the “Corporate VRF” can be setup to redistribute routes with OSPF at these locations. Notice that the remote sites each have routers running VRF-Lite with 802.1Q trunked uplinks connecting to the distribution or PE routers, thereby allowing a logical path for the remote Corporate LAN segments to be mapped into the “Corporate VRF” at the distribution routers. The corporate network is also connected to centralized firewalls (dubbed, the “VRF Meet-me Point”), that allows the other VRFs to access common network services (DNS, DHCP, SNMP, etc.) that reside there. The second VRF to discuss is the “Public VRF” (red). This VRF shows from our previous legacy network example that a separate physical network is not needed when an additional isolated network is required. Here, a “Public VRF” is created for users who need be allowed guess-type access to the Internet. One topic that is yet to be discussed is that within a VRF itself, several different topologies are supported including full-mesh, partial-mesh, and hub-and-spoke. In this case, the “Public VRF” can be configured as a hub-and-spoke so that the only destination a user on the “Public VRF” can reach is the Internet. The two public sites within this example, Sites 1 and 2, are not able to communicate with one another as designed. A practical example for this might be a State or Local Government network providing Internet access to its constituents at library sites. A hub-and-spoke design will allow just the Internet access, without enabling library to library public access communication. The last VRFs to examine in the example are the “Secure-App VRF” (purple) and the “DMZ/Partner VRF” (green). The “Secure-App VRF” is representative of any type of application that has increased security requirements and therefore should be contained in an isolated network. As can be seen from Figure 3, Site 1 & 3 both have a Secure-App VLAN that will be able to communication with one another directly. Any other network services or access required from the Corporate network will need to added to the security policy enabled on the VRF Meet-Me Point firewall(s). The “DMZ/Partner VRF” is representative of a remote site where either an external partner connection or remote internal servers are located requiring additional protection. Enterprise network seem infamous for having “one-off” requests such as these. Either or these requests in a legacy Enterprise network might lead to an additional firewall being purchased and placed at the remote site, where physical security of the firewall is not ensured. With VRF technology available, these servers or partner connections can be connected to the “DMZ/Partner VRF” and transported back to the centralized VRF Meet-Me Point firewalls and again only allowed access to what is necessary on either sides of the connections. Just a few more technical notes to reiterate the flexibility of this new Enterprise model:

Conclusion MPLS L3VPNs is a very mature and scalable technology as it has had its roots in the service provider realm since the turn of the millennium. Enterprise network today share an expanding customer base similar to service providers as IP transport becomes more and more prevalent as the fundamental communication protocol within all IT fields. Ashburn Consulting believes strongly in MPLS L3VPN technology in the enterprise network space as it allows for a flexible, secure, robust and scalable network architecture that is well positioned for the foreseeable future due to its unique ability to virtualize the network. Ashburn Consulting has successfully designed and deployed this technology for both large and small customers and would be pleased to discuss our experience and possible solutions for your Enterprise network as well.

Amante Bustamante is the Senior Network and Security consultant and the company Chief Technology Officer. He is an expert in the design and operation of networking systems essential to supporting complex requirements. Amante Bustamante has over 15 years of Technical IT experience with a specialization in Network and Network Security integrations.